In 1935, Captain McDonald paid another visit to the Irvings. Once again he was frustrated in his attempts to meet Gef. However, he did hear him speak and was given a sample of his hair. (See The evidence for Gef: Pt 3) Harry Price was sufficiently intrigued by McDonald's report to finally visit the island himself.

Gef was none too pleased when he heard that Price was coming. "I like Captain MacDonald, but not Harry Price," he complained. "He's the man who puts the kybosh on the spirits!"

Price arrived at Cashen's Gap on the evening of July 30, 1935. He was accompanied by journalist Richard Lambert, editor of the BBC magazine The Listener. "I wanted a witness in case Gef should put in an appearance," Price explained in his autobiography, Confessions of a Ghost Hunter. But sadly it turned out that no witness was needed, since Gef stubbornly refused to materialise:


"The family was heartbroken at Gef's continued absence. Mrs. Irving was convinced that the mongoose was still about the house, probably listening to every word we were saying. She addressed a few words to him in the hope that her appeal would touch a sympathetic chord somewhere. There was no response."

"Then I addressed a little speech to the four walls of the room, hoping Gef would hear me. I pointed out that we had come a long, long way on his account and that we were entitled to some manifestation: a few words, a little laugh, a scream, a squeak, or just a simple scratch behind the panelling. I even invited him to throw something at me. But all to no purpose." 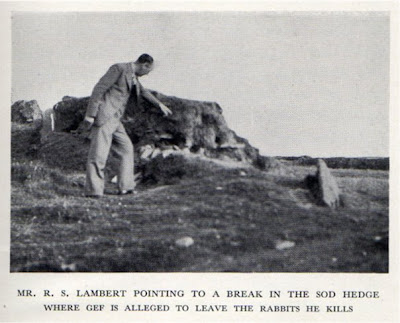 Price and Lambert returned to the farmhouse the following evening, but once again Gef spurned them:


"The Irvings were kindness personified, and did everything for us - except produce Gef! However, Mr. Irving personally conducted us over the house and pointed out Gef's haunts."

"We saw numerous peep-holes; cracks through which Gef threw things at 'doubting' visitors; squint-holes through which the mongoose watches the Irvings and interrupts the conversation with facetious and sometimes rude remarks."

"We saw the runs behind the panelling by means of which Gef can skip, unseen, from one room to another, upstairs or down. In Voirrey's room we were shown 'Gef's sanctum', really a boxed partition, on top of which Gef dances to the gramophone and bounces his favourite ball."

"About midnight we decided that Gef had no intention of coming into the open, and that we had better go home. We had spent many pleasant hours under the hospitable roof of the Irving farmstead, but we could not determine whether, in our role of investigators, we had taken part in a farce or a tragedy."

Once Price and Lambert had left, Gef promptly reappeared. He told Jim that he had taken "a few day's holiday" and had refused to perform for Harry Price since he considered him a "doubter". However, he did agree to make some plasticine impressions of his paws and teeth, which were later forwarded to Price (see The Evidence for Gef: Pt 2).

Price and Lambert subsequently co-authored a short book about the case entitled The Haunting of Cashen's Gap: a Modern 'Miracle' Investigated. While the book remained cautiously neutral, Price's private correspondence apparently suggests that he considered the whole affair a hoax.